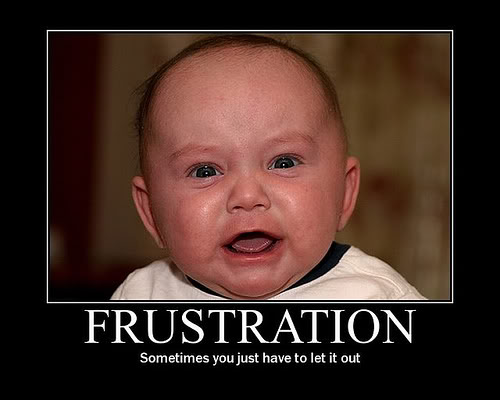 OK, there are many reasons to be/feel frustrated. I acknowledge that. But I’m going to be selfish here and write about what’s been going on with me, perhaps you can relate to part of this. I know that I have written about “generic” frustration, I’ve talked about depression, but never from my own view, what I am truly experiencing.

As I’ve mentioned before, I have epilepsy, its onset was in 1991. To explain part of my current frustration, I feel the need to explain what I had/how often I had seizures. You see, my first seizure was in 1991. That was it, one seizure. It was felt that my blood sugar had dropped drastically and an unusual amount of stress was piled on top. A couple of years went by, (I wasn’t on any medication, not seeing a neurologist) and WHAM, I had my second seizure two years later.

Long story short, this one seizure then a couple of years go by then one seizure routine went on for years and all of my seizures are full-blown grand-mal. While yes, this was frustrating, it wasn’t enough to affect my daily thoughts/life. In 2005 my favorite job (of all time) went away. The company merged with another and I was no longer needed. The next job I found I enjoyed, but the stress that went with it was overwhelming. Then in 2006 I had my record number of seizures – eleven with days when I had multiple in one day. Now while this is nothing to many serious cases of epilepsy, this drastic of a change in my condition made my neurologist concerned. I made the employees of the company I was working for at the time very nervous; to the point where they finally got me to leave. In 2007 I underwent in hospital testing for a month at a time. The first was with electrodes on my skull. The second was with electrodes on my brain (obviously required 2 surgeries), and a lot of pain.

OK. On to my “current” frustration (and being completely honest – about everything).

I haven’t had a job since 2007. Well, I did work part-time for a local store for a short time but like many retail situations, the income wasn’t enough. It being a union store and I was getting a form of insurance, the company was taking around 40-45% of my check. That’s not enough to help with the bills. There’s a major source of depression/frustration just in that alone. I have been an administrative assistant for years, and at the urging of people I trust, I officially started my business of being a virtual assistant in 2009. I enjoy working with my clients, but there isn’t enough to do to keep me busy – busy enough to make money. I’ve discovered that I’m more of a “worker bee” and not really an entrepreneur. There’s nothing wrong with that, many businesses need on-site support staff.

Since 2011, about the time my biggest client re-vamped her business and cut back on a lot of things – like virtual staff – I have been looking for a full-time job. The idea was to be working, having a stable income then build my business from a different angle.

Then WHAM! My husband was diagnosed with tonsil cancer in 2011. He was treated and, thank God, has been cancer-free since September of 2011! Since then I have been looking for full-time work, although I have dropped the search once in a while. But this year I started in earnest looking for work. I’d get interviews for jobs that I really wanted, but then I’d get the “thank you for your interest, but we’ve chosen to go with a different candidate.” Or the “While your credentials are excellent, we’ve chosen a…” I even had a client that had the potential to be a permanent job; the company owner changed his mind – over the objection of the department and department head I was working with.

Am I asking for too much???

While there have been many highs and lows since 2005 (seemingly more lows), I do thank God for the positives:

I am doing my utmost to not scream at God/the Universe. For you see, I have been positive (for the most part) that what I want is mine. The job I want, (which by the way allows for me to be the main income and my husband can go to part-time something) with worries down to a minimum.

So, as I typically answer people, because I really believe I’m going with: the Sun is shining, Life is good.

OMG! How can this be?

It seems that some of my thoughts/beliefs put me in the “old fuddy duddy” category. Just what are these (just some) thoughts that put me there? I’ve made a list and not in any particular order:

Well, yes there is more, but who wants to read my HUGE list? You can get a good idea of my views from this list. I’m not a stick in the mud. I don’t faint at “colorful language,” because I can swear with some of the best. Nude scenes in movies (there’s a LOT more of it, is it really needed for the story?) don’t bother me. It can’t be just me. Have we gone overboard? I still enjoy the I Love Lucy re-runs, no sex/swearing in those. Going back to Harrison Ford and Star Wars – 1977, no sex scenes and the amount of violence was right to tell the story. Oh yeah, another peeve. Why is there so much more violence and sex to tell a story?

OK, stepping down from my soap box. I do know that much like Pandora’s Box, since some things have been released there’s no putting them back. However, mutual respect for one’s fellow man should never be out of mode.

Just my thoughts. What are yours?

When it comes to social situations, how many of you are wallflowers – raise your hands.

OOPS, this being a virtual world, I can’t see the answer. No matter. Us wallflowers don’t always answer those types of questions anyway. WHY? Because it (generally) brings unwanted attention.

OK, how many business owners are wallflowers?

More than you might think. It’s just that some of us have come to learn that if we don’t get “out there” no one will know about us. Think about it. If Abraham Lincoln, Orville Wright, Thomas Edison, Albert Einstein, Tom Hanks or Lucille Ball let their shyness rule, would we have things like planes? Or think about this, if Thomas Edison let his shyness rule, would anyone have accepted his inventions – like the motion picture camera? If that wasn’t invented, how would we see movies? We wouldn’t have gotten to see Tom Hanks in Big. We wouldn’t have seen The I Love Lucy show.

So, now how will anyone know how wonderful your business is if you can’t get past your shyness and/or fear of being in the public eye?

You may have the same/similar argument I have. My work is in the virtual world and is all over, most of my clients are not local. Trust me, I’m definitely with you on that one! I have clients that I’ve never seen and the only reason I know what they look like is because of their picture on one of the social networking sites. But my business coach – who I also have not seen face-to-face – has told me that I need to get out there and strut my stuff.

Strutting your stuff – virtually – can be via social media, a killer website, and awesome marketing. But even with this – wallflower business owners need to engage. It is your face the public sees when it comes to your business (even if it is only a picture).

Now, as this quote says – get out there and dance! “So get closer to the flashing lights, before the night is over just DANCE.”

Um, for the record – and complete honesty – for me, some of this is a do as I say not as I do kind of thing. I really want and hope you do better than me. I know I need to get away from that wall.

This article is also found in Small Biz Forward magazine. There are many other contributing writers with great articles – check them out!